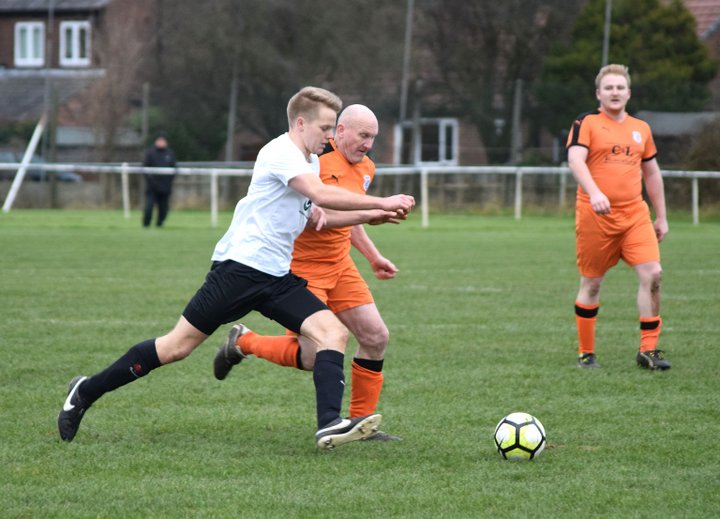 Whaley Bridge extend their gap at the top of the table to 11 points as they defeated fellow title challengers, Poynton, at Horwich Park. The Derbyshire locals won by three goals to two, taking all three points from the game and moving up to 57 points, however if Linotype Cheadle continue to win, the title could go down to the final day of the season.

Knutsford move up to second on goal difference as they won by four goals to nil away at Malpas. The visitors goals game via Liam Crellin-Myers, Alex Crowe, Mark Evans and Alex Mattison. The result moves them ahead of Wythenshawe Town as the Manchester locals drew 1-1 at home to Rylands, Rico Stewart with the goal for Town in that game.

Altrincham Reserves won by four goals to nil at Moss Lane as they defeated Greenalls Padgate St Oswalds. The result means the Alty close the gap on the sides above them, particularly local rivals Wythenshawe and Linotype Cheadle.

Denton beat Garswood by two goals to nil away from home to increase their lead over Poynton and Congleton below them, whilst also moving closer to Altrincham and Co. above them.

Styal picked up a plucky draw at home to Congleton Vale, sharing the spoils with a 1-1 tie. Elliot Smith got the goal for the Wilmslow natives, there is no goalscorers on Full-Time for the visitors.

The final game in the Premier Division saw Eagle Sports defeat Rudheath Social by three goals to one to move clear of the relegation zone for the time being.

Warrington Town Reserves continue their run at the top of Division One with a win away at Halebank. The home side couldn’t keep out the Wire as Brad Parker and Dylan Glass (2) got the goals for Warrington.

Billinge remain in second with a victory away at Daten. The Storks beat the Atoms by two goals at Culceth Sports Club through goals from Ryan Sephton and Steve Wolhurter to move considerably ahead of Pilkington below them.

Pilkington lost away to West Didsbury and Chorlton following a resilient comeback performance from the hosts at Brookburn Road. A Joel Igenoza brace meant that it was the Manchester side that came away with the win.

AFC Macclesfield’s title contention took a major blow as they lost 3-1 at home to FC St Helens in what could be described by some as a shock victory, given both sides’ league positions. The goals for the side in red came via Paul Sweeney, Josh Pilkington and Will Threlkeld.

Lostock Gralam couldn’t muster a win at home to Mersey Valley at the Park Stadium. The Ashton-on-Mersey outfit came out 2-0 winners in Northwich through goals from Danny Watling and Rory McDonald.

It seemed the Witches had put a curse on Egerton as they came away with a comfortable victory at Seddon Street. The goalscorers for Middlewich in this impressive win were Chris Lunn, Ed Marsh (2), Sam O’Sullivan and Mike Whitehead.
Division Two

In Division Two, Barnton Reserves pulled off a surprise draw at home to high-flying Winstanley Warriors at Townfield Lane. However, the result (which happened to be a 2-2 draw) still moves Warriors up to fourth.

Sandbach United were hoping to pull off their second upset victory of the week, after beating Broadheath Central in the week, as they hosted league leaders, Windle Labour. That wasn’t to be however as Windle came away with a 4-1 victory and all three points to move to four points clear of second placed Deva Christleton. Deva’s game against Orford was postponed a few hours prior to kick off.

Knutsford ‘A’ move to the top of the division following their 1-0 victory at home to Rylands. The result means they leapfrog Linotype Cheadle (who play in the Reserves Cup final on Wednesday – make sure you’re there), Greenalls PSO, Garswood United and Eagle Sports.
Meanwhile, Denton Town defeated Styal in Tameside by five goals to one.