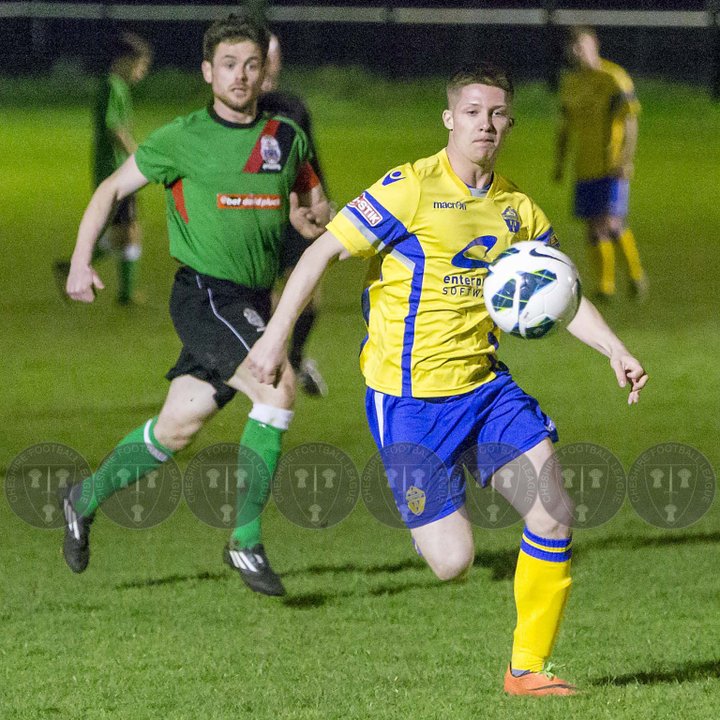 What a week for Warrington!

Whaley Bridge’s 4-1 victory over Rudheath Social means that Knutsford are now unable to win the league. First half goals from Lee Morris, Tom Streets and Adam Barlow plus a second half strike from Joe Burgess gave Bridge the victory at the Park Stadium.

Knutsford lost 2-0 to a Denton Town side who now leapfrog them in the table. Tom Murray and Gavin Salmon got the goals for the Tameside natives at Manchester Road. Knutsford drop down to sixth following the result.

Poynton move into fourth with a victory over Greenalls Padgate St Oswalds in Warrington. Paul Harvey, Steven Kirby and top scorer Rick Tindall picked up the goals for the Macclesfield side. Poynton are now one of only four teams mathematically able to win the Premier Division title.

Linotype Cheadle suffered a blow in their challenge for the title as they fell short away at Crewe. The home side were victorious by two goals to one. Nomads took the lead in the first half through Jonathan Rand before Crewe’s Nathan Southern and Charlie Burden got the home side ahead.

Altrincham Reserves continue their comparatively poor run of form over the past few weeks with a disappointing 3-3 draw at home to Malpas. Goals from Oliver Hailes, Alex Hughes and Thomas Milburn.
In the day’s final Premier Division game, Congleton Vale defeated bottom side Garswood United by three goals to one.

Warrington Town Reserves are promoted to the Cheshire League Premier Division with their 3-1 victory at home to Lostock Gralam. AFC Macclesfield, the only team at the start of the week who could have taken the promotion spot, are now too far behind to catch the Yellows. This good news for Warrington comes just two days after the side won the JA Walton Challenge Cup.

Billinge remain close behind in second, following their 1-0 victory at home to bottom side, Tarporley Victoria. A Liam Bowden goal gave Billinge the win keeping the gap at the top at five points. Billinge have two games in hand over Warrington.

AFC Macclesfield have almost doomed Grappenhall Sports as the Warrington side require a 31-0 victory to stand a chance of avoiding relegation to League Two. A James McCarthy goal wasn’t enough for Sports to take anything from the game as Macclesfield won by two goals to one.

Mersey Valley defeated Golborne Sports by four goals to two away from home to move up to sixth in the table. Goals from Shackeel Depeiza, Dwayne Greenwood (2) and James Liversedge gave the visitors the win at Stone Cross Lane.

Daten lost at home to a Halebank team who are in good form as of late. It finished 2-3 in Culcheth as neither side has all that much left to play for this season.

There were two Division Two games this weekend, Orford defeated Maine Road Reserves to continue their push for promotion this season at Brantingham Road in Chorlton by two goals to one. Meanwhile, Winstanley beat Moore United by seven goals to three.

Garswood United Reserves moved into second with a 4-0 victory away at Poynton. With two games left to go for most sides, it’s going to go down to the dying weeks of the season as Linotype, Garswood, Knutsford and even Greenalls push for the title.

Billinge move into eighth with a victory away at Denton, leapfrogging their opponents with the win.

Styal Reserves are trying to save themselves from relegation as they beat Rylands by two goals to nil thanks to a Callum Whelan brace.

The first of the quarter finals were played this week – Pilkington defeated Sandbach United Reserves by seven goals to nil.

Unicorn Athletic shocked Middlewich Town away from home by three goals to two and Ford Motors defeated Cuddington. Only one quarter final is left to play.

As mentioned previously, Warrington Town Reserves defeated Cheadle Town Reserves in the final on Thursday in Barnton. Brad Smart and Conor Speed got the goals for the Yellows.